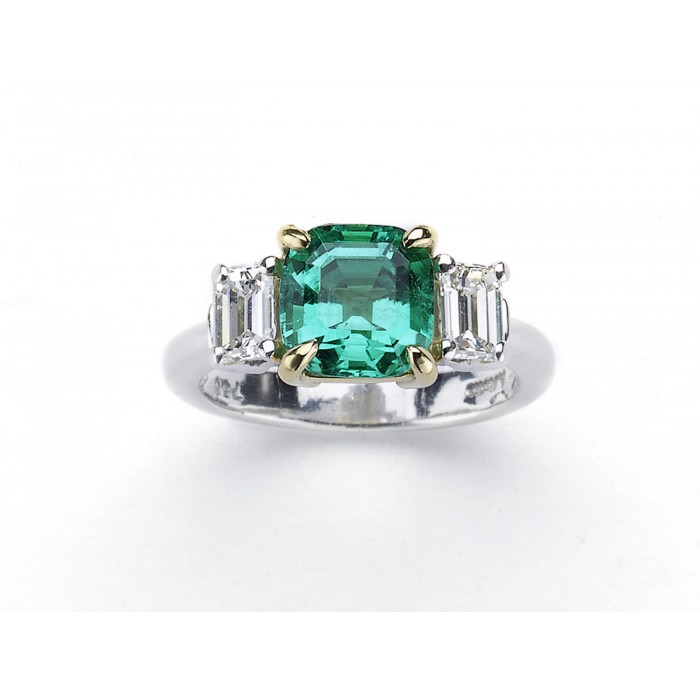 A Colombian emerald and diamond ring, set with a 2.40ct cushion shaped step-cut emerald, in an 18ct yellow, gold four-claw setting, accompanied by GIA certificate 5172407807, stating that the emerald shows characteristics of Colombian origin and no indications of clarity enhancement, with an emerald-cut diamond set in each shoulder, weighing 0.43ct each, mounted in platinum, with a heavy, slightly tapered shank, signed Aletto.

From nineteenth century Italy to present day Florida, the Aletto family has been hand-crafting fine jewellery for five consecutive generations. In 1889, the house's story began when Neapolitan Bartolomeo Aletto was commissioned to design and produce a piece of jewellery commemorating the completion of the Eiffel Tower at the Exposition Universelle in Paris.

Bartolomeo's son, Raffaele, continued his father's legacy, working for many leading Italian jewellers of the day. In 1949, Raffaele’s son, Alberto, left Naples for Caracas, Venezuela, where he established a factory with more than 100 employees. The company moved to New York City in the 1960s.

Alfredo crafts each piece, through each step of fabrication, rather than having workers dedicated to each stage. This is unusual in modern jewellery houses. He is self-taught, having learnt by experimenting with different techniques until he mastered them. He made up his mind to learn and master 'invisible' setting. He then approached Van Cleef & Arpels, who had pioneered the method in the 1930s. He met with Claude Arpels himself and was offered contract work for the company in the mid-1980s.

Alfredo and his four children, Alberto, Amy, Luigi and Mario continue the business today, where they have been part of Boca Raton’s downtown community for more than 30 years.

A modern emerald and diamond ring, set with a 2.00ct emerald-cut emerald, in a four claw setting, with a pair of half moon diamonds set in the...

An emerald and diamond cluster ring, set with a central emerald-cut emerald of Colombian origin, weighing an estimated 21.00ct, surrounded by...

A pair of Cartier, gold, plane cufflinks, with circular gold discs with a cut-out design, one depicting the front view of a biplane, and one...

A modern pair of drop earrings consisting of four separate aquamarine and diamond cluster sections, with an estimated total weight of 17.37 carats...

A pair of 18th century Spanish diamond and gold girandole drop earrings, with rosette tops, with domed centres, with engraved edges, set with a...

A modern diamond "snake" design bracelet, featuring curving waves, set with round brilliant-cut diamonds, with a given total of 9.75 carats, formed...

An Edwardian pearl and diamond ring, set with three natural pearls, measuring approximately 6mm each, with old-cut diamonds set either side, with...

A pair of modern drop earrings consisting of three flowers, with conch pearls to the centre and rose-cut diamond petals, graduating in size from...

An antique pearl and diamond three stone ring, set with natural pearls, either side of a cushion shaped old-cut diamond, weighing approximately...

A Cartier sapphire ring, set with a 7.51ct emerald-cut, non heat treated Burma sapphire. The shoulders are set with a trapezoid and a trilliant-cut...

A sapphire and diamond bombé ring, with a round faceted sapphire, weighing approximately 2.20ct, within a surround of round brilliant cut diamonds...

A modern emerald and diamond ring, set with a 2.00ct emerald-cut emerald, in a four claw setting, with a pair of half moon diamonds set in the...

An emerald and diamond cluster ring, set with a central emerald-cut emerald of Colombian origin, weighing an estimated 21.00ct, surrounded by...