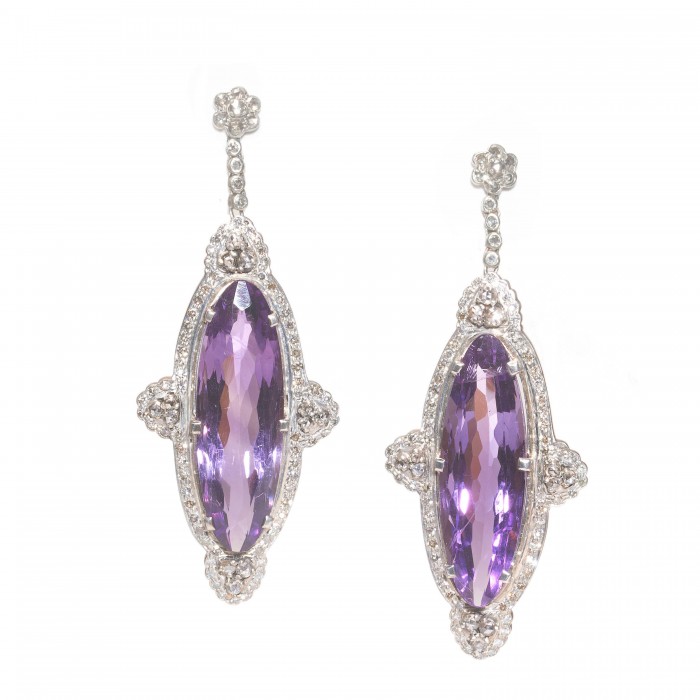 A pair of Art Deco gold and enamel cufflinks, with engine turned centres, with a basket weave pattern, with a blue enamelled Greek key surround,...

A British Royal Fusiliers badge, with a rose-cut diamond set flame, on platinum, over an enamelled crown, surmounting a blue enamelled garter,...

A vintage Italian black onyx and diamond dress ring, set with a square, sugar-loaf shaped, cabochon-cut black onyx, surrounded by a channel of...

A pair of diamond and gold "flowerburst" earrings, with brilliant-cut and eight-cut diamond, pavé set, domed centres and base, and petals in yellow...

A Georgian cannetille brooch-cum-pendant, with a cushion shaped emerald in the centre, surrounded by a cluster of eight, old mine-cut diamonds,...

A Victorian diamond star brooch, with twelve points, set with European-cut diamonds, with an estimated total weight of 7.00ct, with an old-cut...

A pair of modern drop earrings consisting of conch pearl pendant drops, the pearls weighing an estimated total of 17.68 carats, with brilliant-cut...

A pair of Tiffany &amp; Co. cufflinks, with a geometric, double figure-of-eight design, with baguette-cut rubies in the centre, in channel...

A Portuguese, Art Deco, diamond and ruby heart and arrow brooch, featuring a witch's heart, set with rose-cut diamonds, in grain settings; with an...

A three stone diamond ring, set with an estimated total of 1.69 carats of old European-cut diamonds, in our opinion the colour range is I to J and...

An emerald and diamond oval shaped cluster pendant, with an oval, faceted emerald, in a four, double-claw setting, accompanied by Emerald Report...