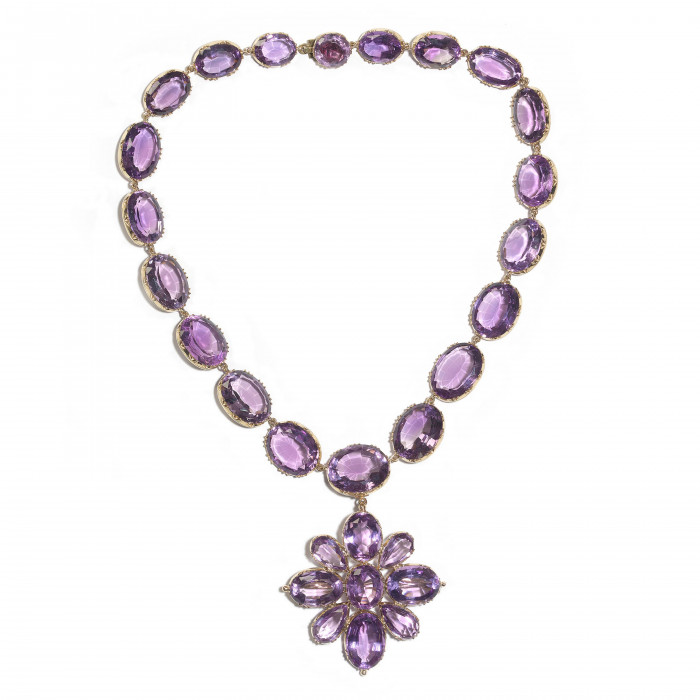 Antique Amethyst and Gold Riviére Necklace and Cross Pendant, Circa 1880

An antique butterfly brooch, with old-cut diamond pavé set thorax and wings, with a faceted emerald in each top wing, with a total weight of...

An Art Deco diamond bracelet by Cartier, mounted in platinum, pavé set with round brilliant-cut, old-cut, square-cut and baguette-cut diamonds,...

A diamond set half eternity ring, round brilliant-cut diamonds, weighing an estimated total of 1.04ct, in our opinion the colour and clarity are...

A modern diamond tennis bracelet, comprised of a single row of fifty-three emerald-cut diamonds, with a given total of 16.56 carats, in four claw...

A modern bee brooch, set with eight-cut and round brilliant-cut diamonds in the wings, thorax, abdomen and head, with millegrain edges and wing...

A large gem set dragonfly brooch, with three old-cut diamonds set in the head, with an oval, cabochon-cut sapphire, weighing an estimated 2.35ct...

A vintage Bulgari white and yellow gold clutch bag, with yellow gold criss cross patterns over a white gold background, in woven 18ct gold, with a...

A pair of vintage, rectangular, two-colour gold cufflinks, with red gold rectangular back plates and yellow gold domed curves, circa 1945.

A pair of gold, flattened curb chain, stirrup cufflinks, mounted in 18ct gold, with sprung fittings, made in Italy with 750 and 1216AL Italian...

A pair of modern cluster earrings, set with pear-shape and marquise-shape diamonds, the diamonds of estimated colour G/H, estimated clarity VS, and...

A pair of modern jade and diamond drop earrings, comprised of circular discs of polished green jade, with a round cluster of brilliant-cut diamonds...

An early Victorian snake necklace, with eight cabochon-cut garnets set in the head, in closed back claw settings, surrounded by scrolling wirework,...