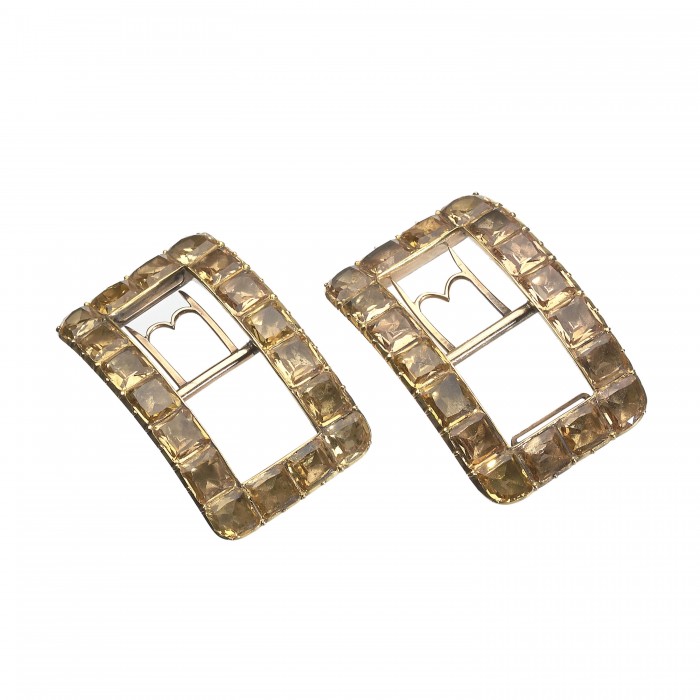 A pair of George III topaz and gold shoe buckles, set with cushion cut foil backed topaz, with cut down settings forming the outer, curved, rectangular frame, with a flat inner edge and closed back. The fittings have two row tongues with double hoop joining bars. Tested as approximately 9ct gold, circa 1790.

Crofts antique dealers, located at 117 Elm High Road, Wisbech, was owned and run by Peter and Patricia Croft, from 1950, for 51 years. After being educated at Wisbech Grammar School, Peter Crofts had volunteered to serve in the Fleet Air Army and subsequently went to the US to train as a pilot. When, aged 20, Crofts was training as a pilot in Texas in 1945, the engine of his Corsair F4U had burst into flames leaving him seriously injured. Both his legs were amputated and he had spent three and a half years recovering in hospital. It was under the guidance of the Stamford dealer Major Bernard Edinburgh that he became an antiques dealer and by 1958 was elected a member of the British Antique Dealers Association.

With thanks to Wisbeach Standard.

A Victorian reverse crystal Norwich terrier dog brooch, within a gold Etruscan style frame, with a clear locket back containing a portrait of a...

A Tiffany &amp; Co., vintage, ruby and diamond dress-set, comprising of a pair of cufflinks and three dress studs, each set with an oval cabochon...

A late Victorian ruby and diamond crescent pendant, set with round faceted rubies, in gold, cut down settings and old-mine and rose-cut diamonds,...

A modern diamond cross pendant, set with a central round brilliant cut diamond, surrounded by baguette cut diamonds, weighing a total of 0.69ct,...

A pair of Moira pansy earrings, with purple and yellow matt basse-taille enamel, and pavé set eight-cut diamonds, mounted in gold with silver...

A pair of modern rock crystal and diamond earrings by Maz, comprised of two fluted sections of rock crystal, flanking a central band of pavé set...

A micro pavé halo ring, set with a 1.00ct, D colour, VS2 clarity oval brilliant-cut diamond, in a four claw floating setting, surrounded by a...

A French antique double owl brooch, with rose-cut diamonds pavé set, in silver, with the wings represented by faceted hessonite garnets and the...

A vintage Cartier bracelet, comprised of three panels, each set with a central trap-cut diamond flanked by triangular and fancy-cut diamonds, with...

A Belle Époque diamond and platinum heart pendant and chain, set with an old-cut diamond, in the centre, in a rub over setting, with a surrounding...