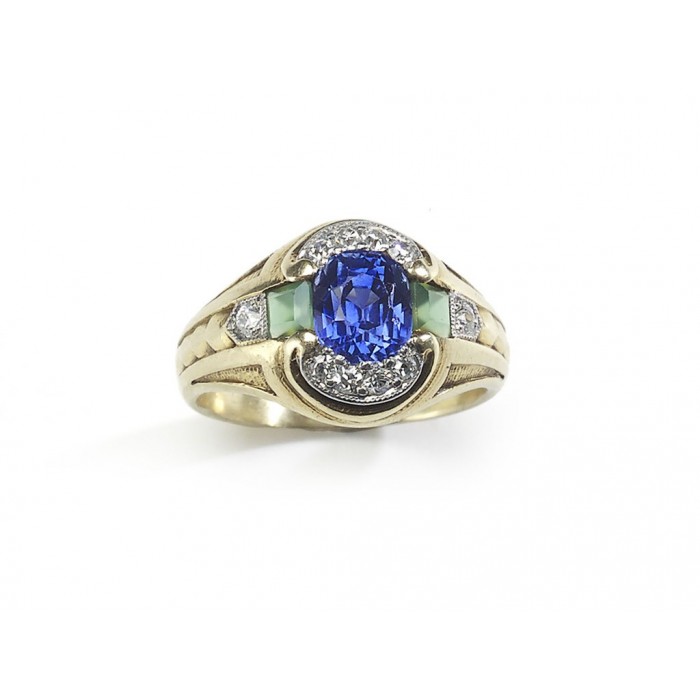 An Art Deco, Durand & Co., sapphire, chrysoprase, diamond and gold ring, set with an oval cut sapphire, with a square cut chrysoprase to each side, within two semi circles of eight-cut diamonds, an old cut diamond in each embossed shoulder, mounted in 14ct yellow gold, circa 1935, stamped 14K, with a D maker's mark for Durand & Co., circa 1935.

Durand & Co., 72 E. Kinney St. Newark NJ, c.1915: 49-51 Franklin St. Newark NJ, circa 1896, 1915 and 1934. The D trademark was a horseshoe, with a nail.
From AJU Lang Antiques
"One of Newark's earliest jewellers was James Madison Durand, whose great-grandfather worked in gold and silver in 'Jefferson Village,' or Maplewood, as early as 1756. The young Durand is particularly interesting because of the route he took to become a businessman, starting as an apprentice, then working at the jewellery bench in an already established firm. Finally, he established his own business. A fledgling businessman in the 1830s, Durand, by the time of his death in 1895, had become one of America's leading jewellery manufacturers. His success was attributed by one of his contemporaries as 'plodding work, careful attention to details, vigilant and constant attention to the business, and a superior skill in design and workmanship.' Durand and Co. was located at 49 Franklin St., with salesrooms in New York City at 9 Maiden Lane. Eventually, Durand and Co. employed 125 men".
From knowingnewark.npl.org

An Edwardian pearl and diamond ring, set with three natural pearls, measuring approximately 6mm each, with old-cut diamonds set either side, with...

A diamond wishbone half eternity ring, set with nine round brilliant cut diamonds weighing an estimated total of 0.25ct, mounted in platinum....

A pair of Bailey, Banks &amp; Biddle gold, oval, engine turned engraved cufflinks, with a pattern of groups of parallel lines, with an indented...

A modern three stone diamond ring, with the central emerald-cut diamond accompanied by GIA certificate number 1226332657, stating that the weight...

A pair of reversible gold cufflinks, set with a line of rose-cut diamonds, in grain settings, on oval, convex, hollow work heads, with solid swivel...

An Art Deco diamond brooch, set with Edwardian-cut diamonds, in an open work, navette shaped plaque, mounted in platinum, circa 1925, with a gold...

An antique Belle Époque diamond buckle design brooch, with old-cut diamonds, with an estimated total weight of 13.65ct, with an Edwardian-cut...

A micro pavé halo ring, set with a 1.00ct, D colour, VS2 clarity oval brilliant-cut diamond, in a four claw floating setting, surrounded by a...

Van Cleef and Arpels Ruby and Gold Cufflinks, Circa...

A pair of vintage, Van Cleef and Arpels, ruby and gold double cufflinks, each with a gold ridge centre within a border of calibre cut rubies to...

An antique sapphire and diamond crescent brooch, set with nine, oval and round faceted sapphires, graduating in size, with an estimated stone...