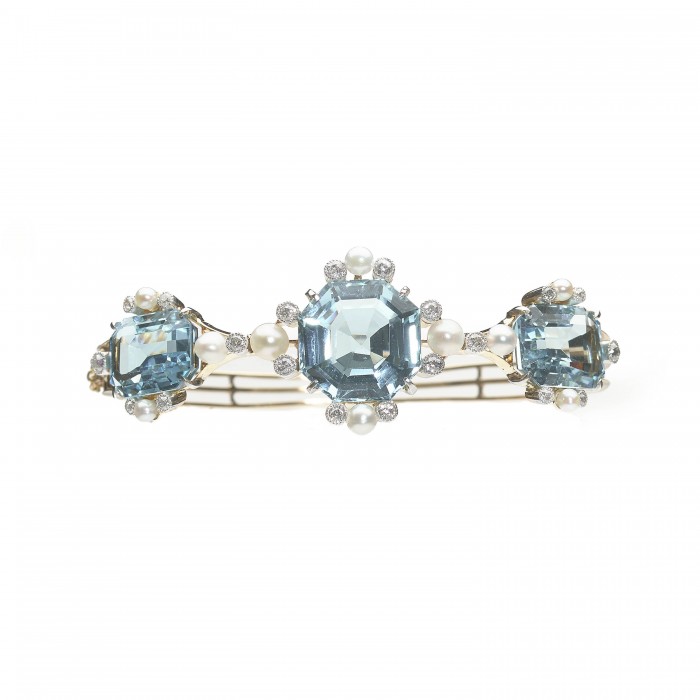 An Edwardian aquamarine, diamond, pearl and gold bangle, by Birks, of Canada, with three aquamarines, the central one being an octagonal shaped faceted step-cut, with a natural pearl set north, south, east and west, with a millegrain edged, rub over set Edwardian-cut diamond, either side of each pearl. The two outer aquamarines are emerald-cut and have a natural pearl set above and below, with a rub over set Edwardian-cut diamond either side, with a diamond and pearl on the inner edges and a diamond on the outer edges. The stones are set on a three row knife-edge, hinged bangle, mounted in 18ct gold, signed Birks, stamped 18K, with a box and tongue clasp and fine safety chain, circa 1905.

The Birks family's roots date back to 16th century Sheffield, England, where they were master silversmiths, being part of Cutlers Company. Their corporate maker's mark was a lion passant, in a cushion shaped cartouche, dated 1774. The jewellery business was established, in Canada, by Henry Birks, when he opened a boutique, on St. James Street, in Montreal, in 1879. In 1893 he was joined by his three sons and officially changed the company name to Henry Birks & Sons. In 1894 the company moved to Phillips Square and produced their first catalogue. From 1901 they expanded across Canada, to every major city, becoming an iconic Canadian brand, renowned for quality and fine craftsmanship. In 1907 their Montreal flagship store underwent major expansion. In 1959 the citizens of Montreal presented Queen Elizabeth II with a silver plate, crafted by Birks. In 1998 they were awarded the Diamond International Award for their "La Plume de Cyrano" feather brooch. In 1998 they became one of the first companies to supply Canadian mined diamonds. In 2010 they were the official Jewellers for the Vancouver 2010 Winter Games. Their modern signature collections are inspired by the surrounding Canadian natural environment. Birks are Canada’s leading designer of fine jewellery and the brand is now distributed internationally.

With thanks to Birks' official video for the company history.

A blue-pink plique-a-jour enamel butterfly brooch, set with an emerald to the thorax, weight approximately 0.14ct, and round brilliant-cut diamonds...

A red enamel butterfly pendant, with guilloche enamel depicting the veins in the wings, with 0.28ct of round brilliant-cut diamonds, in the wings,...

A flower brooch, with cream and red enamelled petals, with an old-cut diamond in the centre and rose-cut diamond set stamens. The gold stem forms a...

An Art Deco ruby and diamond bracelet, with alternating square plaques set with groups of four square-cut rubies, in an openwork mount, with...

A pair of vintage diamond and natural pearl flower earrings, mounted in platinum on gold, with pavé set petals. The approximate total diamond...

A pair of modern sapphire and diamond drop earrings, the top studs are set with old cut diamonds, with baguette-cut diamonds below and old-cut...

A pink topaz and diamond pendant, set with a 2.23ct, oval, faceted pink topaz, in an oval micro pavé surround, with an air gap between the centre...

A pair of tourmaline and peridot earrings, mounted in 18ct gold, set with mixed cuts of green tourmaline, with a total weight of 15.40ct, peridot,...

An English, antique, gentleman's dress set, with cabochon-cut blue lace agate and white enamel surrounds, on 15ct gold, comprising of a pair of...

A Bohemian garnet bracelet, consisting of rose-cut garnets, with a central circular cluster of garnets graduating in size, the bracelet consisting...

A pair of modern drop earrings, consisting of an open pear-shaped pendant drop, set with articulated pear-shaped diamonds, with a total weight of...

A pair of Cartier, gold, plane cufflinks, with circular gold discs with a cut-out design, one depicting the front view of a biplane, and one...

A pair of modern drop earrings consisting of conch pearl pendant drops, the pearls weighing an estimated total of 17.68 carats, with brilliant-cut...