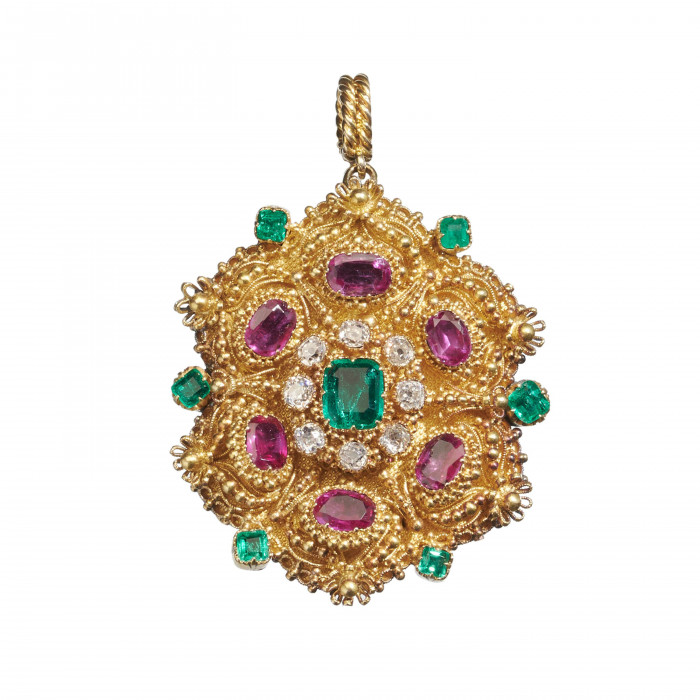 A Georgian cannetille brooch-cum-pendant, with a cushion shaped emerald in the centre, surrounded by a cluster of eight, old mine-cut diamonds, with six, oval faceted rubies and six square emeralds in the surround, with the settings, granulation, cannetille twisted wirework and florets soldered onto an oval shaped, scalloped edged, embossed, granulated plate, giving a three dimensional effect, mounted in gold, circa 1830, with a double twist bail and a later pin.

Cannetille work was in fashion from 1815 to 1840. It was inspired by embroidery, particularly styles seen in peasant clothing. It was made by soldering thin threads, forming scrolls, rosettes and coils together to form a three dimensional design, often embellished with granulation. It became popular during this era due to the shortage of gold, in Europe, because of the Napoleonic wars. This technique could produce larger, ornate looking pieces, using less gold and comparatively cheaper gems. The considerable time and skill involved was balanced by low labour costs. The jewels were often embellished with coloured gemstones, such as aquamarine, pink topaz, amethyst and chrysoberyl. Czech garnets, turquoise and opals were often set in pieces from central Europe. Rubies were seen in English cannetille items. The settings were usually closed backed and foiled. The taste for and manufacture of cannetille jewellery decreased in the 1840s. Cannetille was at its height of popularity around 1830.

An antique, Austrian, Burma ruby and diamond chequerboard brooch, with French-cut rubies, in claw settings, surrounded by old-cut diamonds, in...

A pair of diamond stud earrings, with round brilliant-cut diamonds, with an approximate total diamond weight of 0.44ct, in our opinion the colour...

A South Sea pearl and diamond ring, with a large bouton pearl, surrounded by a diamond cluster, set with approximately 3.00ct of pear shape, round...

An Art Deco, agate, black onyx and diamond dress-set by Ghiso, comprising a pair of cufflinks, four buttons and two collar studs, each with three...

A pair of diamond drop earrings, with an openwork scrolled frame, with trefoil flowers, set with round brilliant-cut and rose-cut diamonds, each...

A gem set bee pendant, with an oval cabochon cut opal and amethyst set to the body, articulating wings, set with eight-cut diamonds, and ruby eyes,...

A Victorian crescent moon brooch, the body set with round, old-cut diamonds graduating in size, mounted in silver-upon-gold (tested as 15ct gold),...

A pair of Art Deco, circular cufflinks, with white enamel in a geometric design, with rose-cut diamonds in flower settings to the centres, and bar...

A modern three stone diamond ring, set with three round brilliant-cut diamonds, with an estimated total weight of 1.60ct, in claw setting, mounted...

Diamond, Sapphire and Platinum Earrings, Circa 1980

A pair of Art Deco style, diamond and sapphire, drop earrings, set with round brilliant-cut diamonds and baguette-cut sapphires, mounted in...

A sapphire and diamond ring, set with a cornered-cut, lozenge shape Ceylon sapphire, weighing approximately 4.81ct, in a four claw setting, with a...

An antique, Austrian, Burma ruby and diamond chequerboard brooch, with French-cut rubies, in claw settings, surrounded by old-cut diamonds, in...