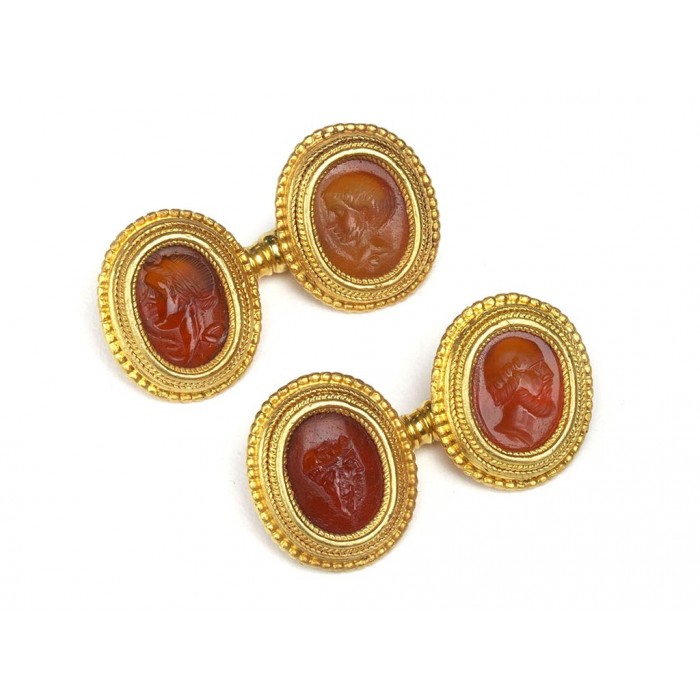 A pair of Wiese, intaglio cufflinks, set with cornelian intaglios, mounted in 18ct gold. The intaglios depict a child's head; the bust of a philosopher; Hygeia, the Greek goddess of hygiene, with a serpent around her neck, this intaglio is dated to circa third century A. D. and Gryllus, a Greek mythological character, who was half man, half pig, with two faces, one on his stomach; this intaglio is dated to circa second century A. D.. The cast mounts depict three rows of rope style wire twists, with a beading surround, in fine gold, with carabiner fittings, with French eagle marks, signed Wiése. Accompanied by an invoice dated 1925.

Jules Wièse is regarded as one of the finest silver and goldsmiths of the 19th Century. Born in Berlin in 1818 he became apprenticed to the court goldsmith Johann Georg Hossaeur at the age of sixteen. Not long afterwards he moved to Paris, working first for J-V Morel before settling in a position with the renowned jewellers Froment-Meurice in 1839. He quickly rose to become workshop manager, tripling his wage in the process, before deciding that further financial gains could be made by setting up his own workshop which he did in 1845 at number 7, rue Jean-Pain-Mollet. To begin with he worked exclusively for his former employer who recognised his invaluable contribution at the 1849 Paris Exposition by ensuring that Wièse was awarded a collaborators medal. By the time of the next Paris fair six years later, Wièse was exhibiting under his own name having registered his makers mark some years previously. This consisted of his initials JW with a star above and below within a vertical lozenge it was registered in 1844 and remained in use for the next forty six years. The exposure he gained at this fair won him a significant and widely appreciative audience, including his peers and the judges, who awarded him a First Class medal for his work, commending him on his “excellence as a modeller and inventor”. On seeing his display stand, Wièse’s contemporary M. Magne wrote that he was a “fine goldsmith and jeweller with an already distinguished reputation… the importance of his pieces and his brave experiments reveal, even in the most modest work, an awareness of art and beauty which deserves to be encouraged….” He continued to produce both jewellery and other items such as mirrors, knives and goblets in the Neo-Renaissance style for many years, winning further medals in Paris and London, and securing various commissions including one from the city of Autun for a decorative presentation sword. His work was highly sculptural, often featuring figures which could be either human or mythological in nature, many with a definite Gothic overtone. In 1880 his son Louis (1852-1923) assumed control of the workshop having been trained by his father and when Jules died ten years later, Louis registered his own makers mark - the name WIESE with a star above and one below in a horizontal lozenge. Described by Vever as “an exceptionally modest and truly talented artist” Louis sought to continue the exemplary reputation for fine craftsmanship that his father had earned during his career. He continued working in the same tradition, producing beautifully crafted goldwork (sometimes to his father’s designs) which explored the familiar themes of the Neo-Renaissance and Gothic imagination whilst also looking to religion and archaeology to inspire him. He frequently employed grotesque beasts and gargoyles, ecclesiastic detailing and historic influences. If gems were used he would typically set them using antique-inspired methods and he was also known to use mercury oxide to distress the surface of metal, further enhancing the ‘aged’ appearance of his jewels. Enamelling was used to introduce colour and add another dimension to his pieces which are still highly regarded today and collected by a discerning group of individuals including contemporary goldsmiths. Examples of Wièse jewellery can be found in major museums worldwide including the British Museum and the Musée des Arts Décoratifs in Paris.

A pair of Art Deco, coral, black onyx and diamond cufflinks, with a diamond set in the centre of three, diagonally set, black onyx squares in a...

A pair of antique gold frog cufflinks, with models of frogs on oval back plates, with a wire twist within the surround, mounted in gold with a...

A pair of red and black enamel on gold cufflinks, with geometric designs. One bar is signed Tiffany &amp; Co. With French eagle marks for 18ct gold...

A pair of Art Deco, circular cufflinks, with white enamel in a geometric design, with rose-cut diamonds in flower settings to the centres, and bar...

A pair of antique, green and white enamel heart shape cufflinks, with old-cut diamonds set in the centre, with surrounding green, guilloché enamel,...

A pair of vintage, Cartier, gold and ruby cufflinks. Each of the double links comprise an open circle with a row of channel set, square-cut rubies,...

A pair of Art Deco sapphire and diamond cufflinks by J. E. Caldwell, mounted in platinum, with a directional finish, with a diagonal line of pavé...

A pair of ruby stirrup cufflinks, set with square-cut rubies, in channel settings, with sugarloaf rubies in the terminals, mounted in 18ct yellow...

Gold, Citrine and Diamond Cufflinks, Circa 1960

A pair of two colour gold and citrine cufflinks, mounted in 18ct yellow gold, with a white gold edge, set with four baguette-cut citrines, with an...

A pair of vintage, rectangular, two-colour gold cufflinks, with red gold rectangular back plates and yellow gold domed curves, circa 1945.

A pair of reverse crystal horse cufflinks, one with a dappled grey horse and a black horse, the other has two bay horses, both with white nose...

A pair of Art Deco black onyx and diamond dress-set, set with baguette and old-cut diamonds mounted in white gold, with yellow gold links. In a...

A pair of stirrup cufflinks, mounted in silver and gold, with French marks.

An Art Deco ruby, white gold and enamel dress set, comprising a pair of cufflinks, four buttons and three studs. Each link is set with a square-cut...

A pair of Art Deco, coral, black onyx and diamond cufflinks, with a diamond set in the centre of three, diagonally set, black onyx squares in a...

A pair of antique gold frog cufflinks, with models of frogs on oval back plates, with a wire twist within the surround, mounted in gold with a...