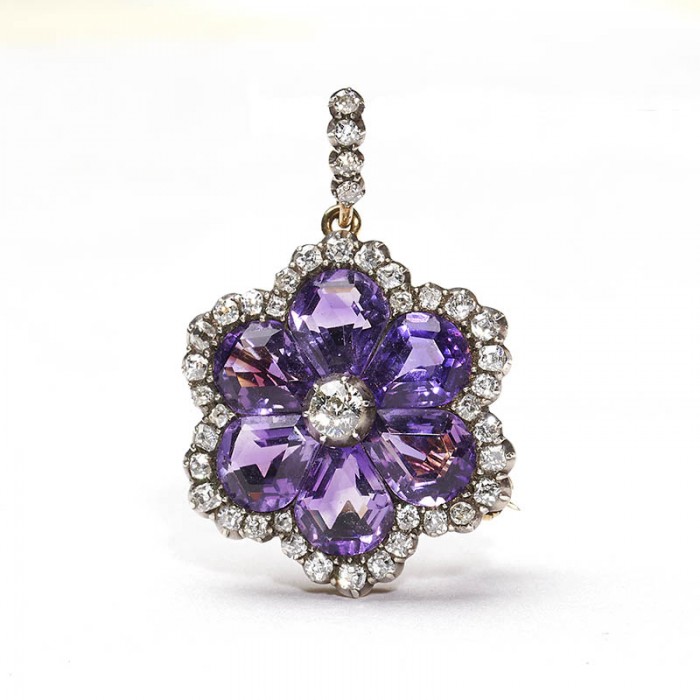 An antique, amethyst and diamond, flower cluster brooch-cum-pendant, set with a central old-cut diamond, in cut-down settings, with six, fancy, pear shaped amethysts, forming petals, surrounded by old-cut diamonds, in cut down settings, mounted in silver-upon-gold, with a drop down bail, English, circa 1890.

A Belle Époque diamond and platinum heart pendant and chain, set with an old-cut diamond, in the centre, in a rub over setting, with a surrounding...

A diamond cross pendant, set with a central round brilliant-cut diamond, surrounded by baguette-cut diamonds, weighing a total of 0.72ct, mounted...

A French retro modernist smoky quartz and gold pendant, with a square, shaded tile of smoky quartz, held by a surround of rectangular heavy gold...

A Victorian gold locket, with an oval outline, with ridge and wire twist Etruscan style work on both sides, with a plain gold bail and a detachable...

A pink topaz and diamond pendant, set with a 2.23ct, oval, faceted pink topaz, in an oval micro pavé surround, with an air gap between the centre...

An antique Bohemian garnet star and crescent pendant, with a pavé set rose-cut garnet crescent and a round faceted garnet set star, in closed back...