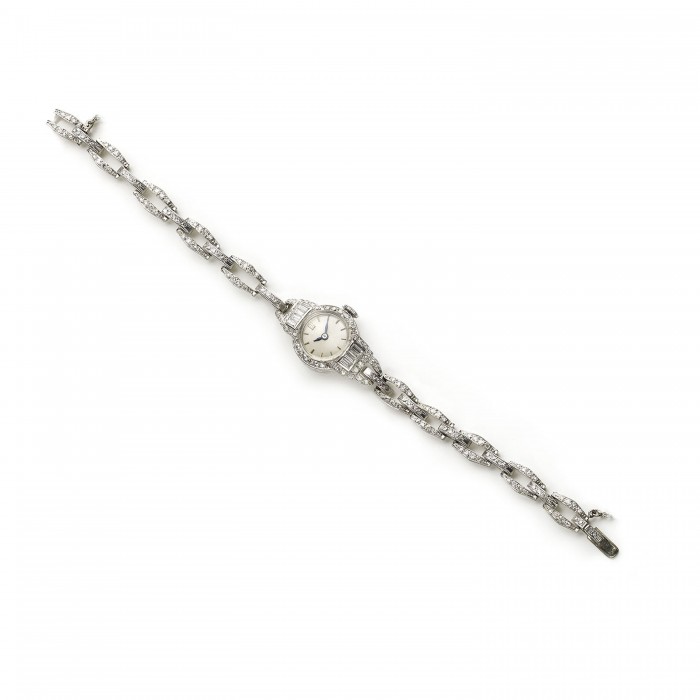 An Art Deco diamond cocktail watch, with a later Bueche-Girod movement, with a round unmarked silvered dial with baton hour markers, with blue steel hands, in a round platinum two part case, with foliate engraved sides, set with eight-cut diamonds in the bezel, lugs and bracelet, and baguette cut diamond set shoulders, in a geometric Art Deco design, the bracelet is an eight-cut diamond set modified trace chain design, mounted in platinum, with a safety chain. The inside of the case is marked H Ltd and stamped 'plat' and numbered J785 G8025, the manual wind movement is signed Bueche-Girod and has 17 jewels. The outer case back is engraved with the monogram HPW and is dated 19th September 1939. Estimated total diamond weight 2.75ct.

Bueche Girod was a small watchmaking company founded in 1947. The foundations of the company were started by A. Bueche, in 1937. Despite its modest size, its master watchmaker Vital Bueche was well-known for producing excellent movements, and had many patents including the moon-phase and plain calendar. Just a few years after the company’s creation, Vital turned his attention to producing movements and watches for other large companies, such as Cartier and Bulova and carrying out small orders for automobile companies. Bueche Girod continued to release its own watches, often ladies watches with elaborate or jewellery-like designs. They mainly worked in gold, including making white gold watches, which were rare at the time, set with precious stones, using predominantly high quality mechanisms. In the 1970s Bueche-Girod became a designer watch brand focused on the luxury, high priced, market sector and minor editions. The company closed in the late twentieth century. Its watches have become collectors items.

An Art Deco diamond set platinum bow choker, with an old-cut diamond set plaque, in the form of a bow, mounted in platinum, on a black moiré ribbon...

10 other products in the same category:

An Art Deco ruby and diamond cocktail wristwatch, with a square, silvered dial, with dot and baton indicators and silver hands, surrounded by...

An Art Deco diamond and platinum cocktail wristwatch, with a white, round dial, with black Arabic hand painted numerals, within a ring of minute...

A vintage, Universal, ladies' wristwatch, with a fluted sliding cover over the rectangular face, with a copper satin finished dial, with black...

Cartier Diamond Back Winder Wristwatch, Circa 1950

An Art Deco diamond set platinum bow choker, with an old-cut diamond set plaque, in the form of a bow, mounted in platinum, on a black moiré ribbon...