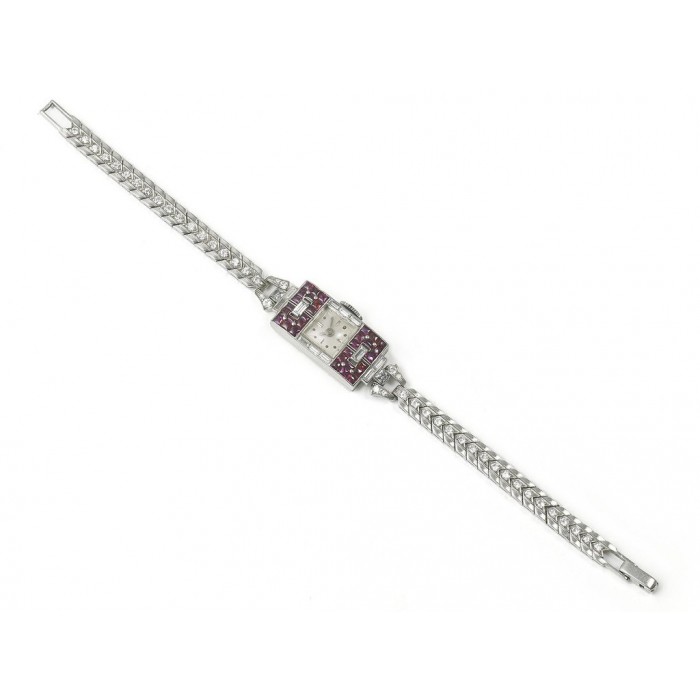 An Art Deco ruby and diamond cocktail wristwatch, with a square, silvered dial, with dot and baton indicators and silver hands, surrounded by buff-topped calibre-cut rubies, with baguette cut diamonds in a rectangular platinum case, the lugs are set with a French cut diamonds, with round brilliant cut diamonds set in the platinum articulated chevron link design bracelet. Enclosed is a 17 jewel, Mathey Tissot manual wind movement, mounted in platinum, the clasp is marked 10% IRID PLAT, PAT No. 175495, the interior of watch back is stamped PT950, circa 1930.

The Mathey-Tissot Watch Company was founded, in 1886, in Les Ponts de Martel, in the Swiss Jura Mountains. Initially specialising in "repeater" watches, that chime the hour and half hour, moving to the production of prize winning chronographs (stop-watches). In 1890 Mathey- Tissot built a new larger factory was built. In the Kew Observatory Competition of 1914, Mathey-Tissot was represented by six chronographs. During World War I, Mathey-Tissot was called on to supply the United States Army Corps of Engineers with large quantities of precision chronographs. They also supplied the United States armed forces and the British Navy, during World War II. The company is still producing watches today.

A vintage ruby and diamond cluster ring, with a low domed bombé cluster, set with early round brilliant-cut diamonds, with an estimated total...

An Art Deco, ruby and diamond bar brooch, by Marcus, set with five, French-cut rubies in the centre, in channel settings, with six, Edwardian-cut...

10 other products in the same category:

An Art Deco diamond cocktail watch, with a later Bueche-Girod movement, with a round unmarked silvered dial with baton hour markers, with blue...

Cartier Diamond Back Winder Wristwatch, Circa 1950

A vintage, Universal, ladies' wristwatch, with a fluted sliding cover over the rectangular face, with a copper satin finished dial, with black...

An Art Deco diamond and platinum cocktail wristwatch, with a white, round dial, with black Arabic hand painted numerals, within a ring of minute...

A vintage ruby and diamond cluster ring, with a low domed bombé cluster, set with early round brilliant-cut diamonds, with an estimated total...

An Art Deco, ruby and diamond bar brooch, by Marcus, set with five, French-cut rubies in the centre, in channel settings, with six, Edwardian-cut...