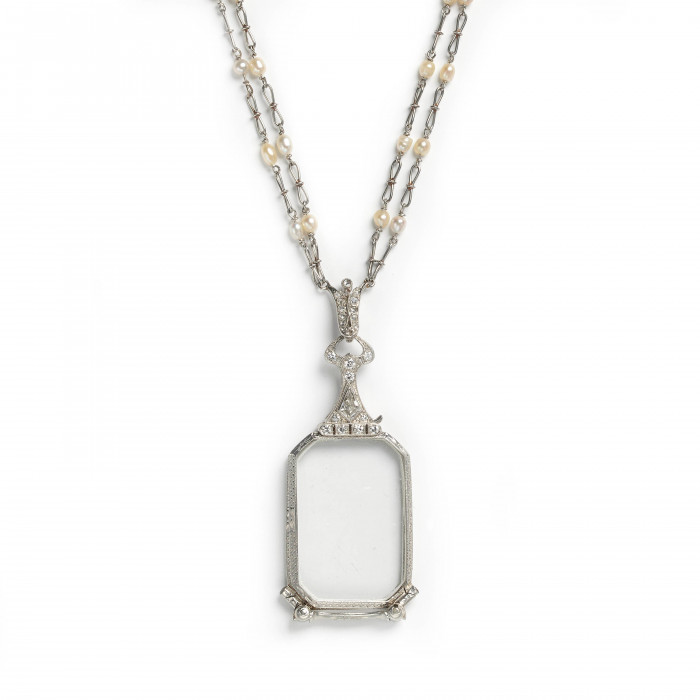 An Art Deco diamond set lorgnette, on a pearl and platinum double long chain, with cut corner rectangle lenses, in engraved and millegrain edged surrounds, with a handle set with a kite-shape diamond, surrounded by eight-cut and round brilliant-cut diamonds and a tulip shaped bail, set with rose-cut diamonds, the chain has clamped fetter links, alternating with natural pearls, the bridge is stamped irid. plat. with a D maker's mark for Durand & Co., circa 1930.
Durand & Co., 72 E. Kinney St. Newark NJ, c.1915: 49-51 Franklin St. Newark NJ, circa 1896, 1915 and 1934. The D trademark was a horseshoe, with a nail.
From AJU Lang Antiques
"One of Newark's earliest jewellers was James Madison Durand, whose great-grandfather worked in gold and silver in 'Jefferson Village,' or Maplewood, as early as 1756. The young Durand is particularly interesting because of the route he took to become a businessman, starting as an apprentice, then working at the jewellery bench in an already established firm. Finally, he established his own business. A fledgling businessman in the 1830s, Durand, by the time of his death in 1895, had become one of America's leading jewellery manufacturers. His success was attributed by one of his contemporaries as 'plodding work, careful attention to details, vigilant and constant attention to the business, and a superior skill in design and workmanship.' Durand and Co. was located at 49 Franklin St., with salesrooms in New York City at 9 Maiden Lane. Eventually, Durand and Co. employed 125 men".
From knowingnewark.npl.org   Durand & Co., circa 1930.

A rock crystal and diamond expanding bracelet, with a geometric pattern, comprised of a series of carved rock crystal links, with alternating rows...

A pair of Art Deco diamond earrings, set with a central row of Edwardian-cut diamonds, with a row of baguette-cut diamonds either side, with round...

A diamond necklace, with a row of channel set, baguette-cut diamonds, weighing an estimated total of 20.00ct, graduated, tapered towards the back,...

A sapphire, ruby, pearl and white gold sautoir, with sapphire and ruby "native" tumbled cabochon beads, interspaced with pearls, wire linked on a...

An antique diamond necklace and earring suite, with a drop pendant, set with an old-cut diamond, in a claw setting, surrounded by a circle of grain...

A modern diamond tennis necklace, comprised of a single row of one hundred and seven round brilliant-cut diamonds, with a given total of 16.05...

An antique amethyst and gold riviére necklace with large, oval faceted, graduated amethysts, in open backed cut down bezel settings, and an...

A vintage diamond line necklace, comprised of fifty three, round brilliant-cut diamonds, weighing an estimated total of 8.00 carats, of estimated...

A pair of Victorian gold bracelets, with a woven design, featuring a row of flowers, superimposed on V shaped links, flanked by D cross-section...

A modern diamond tennis necklace, comprised of a single row of round brilliant-cut diamonds, with a given total of 16.01 carats, in four claw...

A rock crystal and diamond expanding bracelet, with a geometric pattern, comprised of a series of carved rock crystal links, with alternating rows...

A pair of Art Deco diamond earrings, set with a central row of Edwardian-cut diamonds, with a row of baguette-cut diamonds either side, with round...