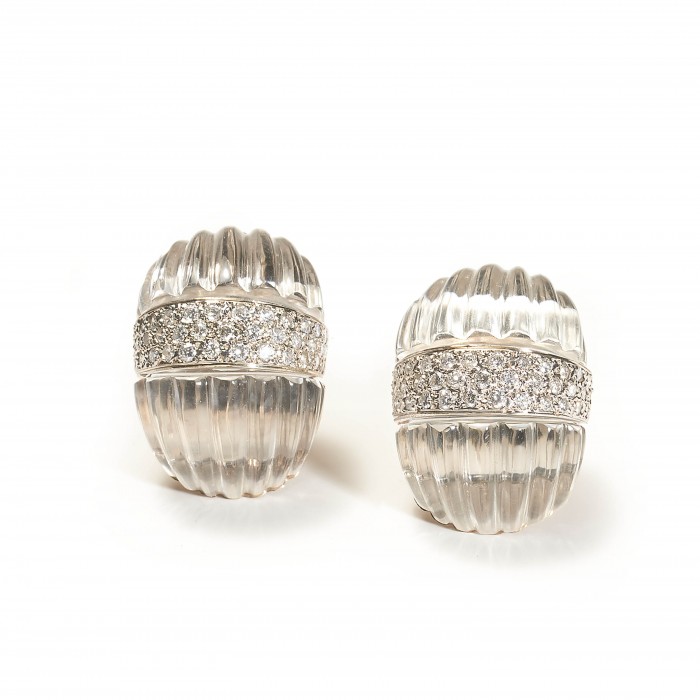 Louis Mazza was a descendant of a family of jewellers, with roots dating back almost two centuries. The Mazza family were cameo carvers, established around 1840, working with coral and conch shells, which they harvested and hand carved, in a small town just south of Naples, called Torre del Greco. Louis emigrated to the United States, around the turn of the 20th century, to import gems and his Mazza family carvings. His business expanded into a jewellery design house, with his four sons joining him, between 1950 and 1960. His third son, William, worked closely with major designers. In 1970 he produced his first collection for I. Magnin and Bergdorf Goodman, under the Mazza name. The company is still family owned.

With thanks to Treasure Fine Jewelry

A lapis lazuli, frosted rock crystal and diamond dress-set, with central round brilliant-cut diamonds with a circular surround of lapis lazuli, and...

A magnificent French Art Deco diamond bracelet, set with approximately 20.00ct of old-cut diamonds. The sides are engraved with a foliate and...

Aquamarine Multi-Stone Bracelet with Diamond in...

A multi stone aquamarine bracelet, made by Moira, set with mixed cuts of faceted and cabochon aquamarines, weighing an estimated 369.00ct, and...

A pair of Victorian drop earrings, made in the Etruscan style, consisting of a long pendant drop, with fringed tassels, suspended by a spiked...

An emerald and diamond flower pendant, set with marquise diamond petals, in claw settings and a round faceted emerald in the centre, in a rub over...

A pair of modern drop earrings consisting of three flowers, with conch pearls to the centre and rose-cut diamond petals, graduating in size from...

A vintage, Georg Jensen, horse dress-set, designed by Arno Malinowski, with a tie clip, cufflinks and studs, with a horse head design, mounted in...

An antique diamond crescent brooch, set with old-cut diamonds, weighing an estimated total of 4.50ct, in a three row design, with an inner row and...

A diamond bow brooch, pave set with round brilliant cut diamonds weighing an estimated total of 22.00ct, in 18ct white gold, with a pin and tube...

Fabergé Diamond and Enamel Cufflinks, Circa 1899